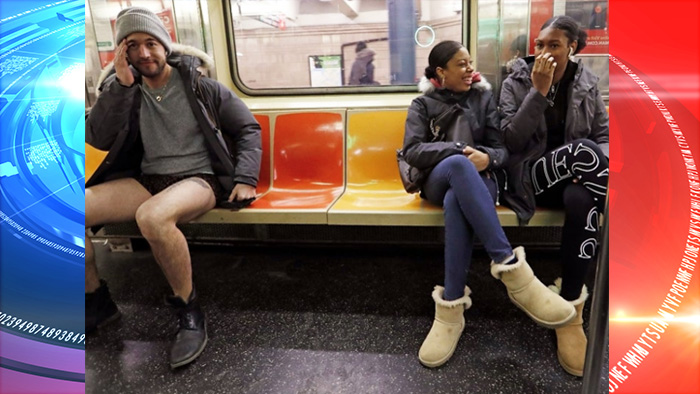 NEW YORK CITY, NY — The weather certainly won’t be an issue for stripping subway goers eager to take part in the No Pants Subway Ride on Sunday.

The worldwide event is happening for the 19th year in a row, with thousands of participants in New York City expected to shed their pants throughout the cars and platforms of the subway system.

Now in dozens of cities, the annual event was started by the comedy group Improv Everywhere in New York during 2002.

Here’s what you need to know about the cheeky event.

At the meeting point, participants will be assigned into groups and given a specific subway line and train car, according to Improv.

“Sit in the car as you normally would,” Improv says.

“As soon as the doors shut at the stop before yours, stand up and take your pants off and put them in your backpack. If you’d like to use a briefcase, purse, grocery bag, or whatever instead of a backpack that’s fine too. If anyone asks you why you’ve removed your pants, tell them that they were ‘getting uncomfortable’ (or something along those lines.)”

The event’s organizers also made a big distinction on the type of underwear to avoid.

“Don’t wear a thong or anything else that might offend people,” says Improv. “Our aim is to make people laugh, not piss them off.”

Of course, you can just stay away from the subway instead.