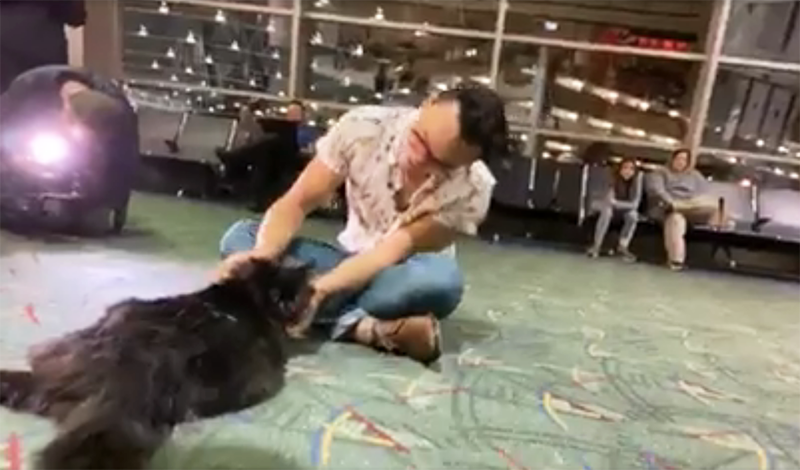 PORTLAND, OR — It had been five years since Viktor Usov last stroked his cat, Sasha. Of course, he had wondered over the years what had happened to the scruffy black kitten he had adopted from a Portland animal shelter. They had formed an instant bond. But as for seeing Sasha ever again, Usov figured that was wasted dreaming.

Sasha had gone out to prowl one night and never came back. So when folks at an animal shelter 1,200 miles away in Santa Fe, N.M., called Usov to say his cat had been found wandering the streets, he thought it had to be a mistake.

“No way,” Usov told CNN after learning of the wanderlust cat’s journey from Oregon to New Mexico. “That can’t be my cat. That must be a malfunctioning system.”

The Santa Fe Animal Shelter found Sasha. He wasn’t wearing a collar, but a microchip in his ear traced the cat back to Usov in Portland.

The cat’s journey from the Pacific Northwest to the desert Southwest made sense when Usov thought about it.

“He was very adventurous. He probably went on an all-American adventure,” Usov told news station KPTV. “Saw the Grand Canyon, Crater Lake, the monuments — who knows?”

It’s a pity that the #catsofinstagram depend on humans to post photos of their antics. Sasha surely has some cat tales to tell.

Only he knows what went on during those five years. But wherever Sasha’s travels took him, he ate well. When the Santa Fe Animal Shelter worker scooped him up from the streets, he was an armful.

“Sasha loves food,” Murad Kirdar, a spokesperson for the shelter, told KPTV. “Sasha’s gained a lot of weight, is about 19 pounds, very heavy.”