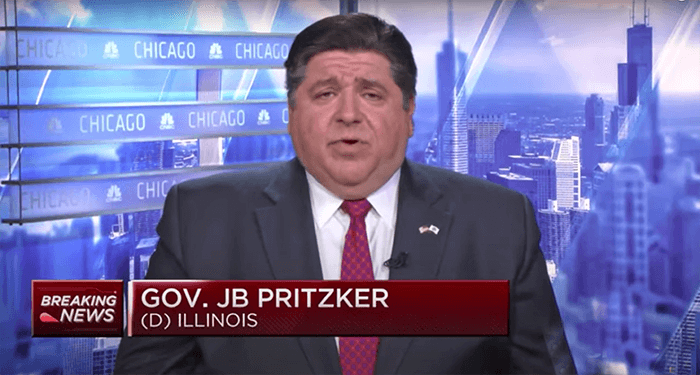 “Illinois has now overtaken New York as the No. 1 state in the nation for per capita testing over the last seven days,” the billionaire rookie politician said on his televised daily pandemic update.

Aside from being a meaningless made-up weekly ranking, Pritzker’s “news” also is misleading.

Overall, New York has a testing rate of 73,669 per 1 million people. Illinois’ testing rate is 47,346, according to the COVID Tracking Project.

There is no such thing as a week-by-week national coronavirus testing contest that Pritzker says he’s winning.

And it doesn’t take a genius to know to compare test totals in New York, or any other state, to Illinois’ testing count is a metric that only matters to a governor with national political ambitions.

Pritzker’s exciting made-up “news” does show that the governor really wants to put a positive spin on his administration’s slow testing response, particularly in minority communities.

It’s a thinly veiled attempt to get people to focus on the “last seven days” of his coronavirus response, rather than previous weeks when his hyped strategy to boost testing with the help of community health centers didn’t deliver as the deadly virus spread.

The governor hopes people forget Illinois Democrats publicly called him “unconscionable” for “not testing an entire segment of the population” hardest hit by COVID-19 before he finally directed testing locations in their neighborhoods.

He certainly doesn’t want me to reprint the advice from state Rep. LaShawn Ford he didn’t take: “The governor needs to apologize to the black community and the [community health centers] for not delivering tests he promised. It would be a simple thing to do. The right thing to do. Nobody’s dying like us.”

My guess is the governor didn’t like that much and hasn’t forgotten it.

It’s the kind of blowback from a fellow Democrat that probably inspired Tuesday announcement that Pritzker tapped a group of minority community “influencers” to star in a series of radio and video messages “that focus on the disproportionate impact of the COVID-19 pandemic in communities of color.”

But I can’t be sure. Transparency and honesty isn’t a hallmark of Pritzker’s administration.

We can’t even be sure if the governor’s administration is telling the whole truth about Illinois’ testing totals Pritzker keeps bragging about.

On Monday, Mayor Lori Lightfoot said the city’s testing average is 3,500 a day.

The state’s online COVID-19 data shows an average of 5,000 tests per day in the last seven days.

How can anybody be certain Pritzker’s not cooking the books? The only explanation the state offers is in small print on the IDPH website, “The data is constantly being entered and may change as cases are investigated. Therefore, numbers may vary from other sites where data is published.”

That doesn’t seem like a scientific way to explain such a vast discrepancy in test statistics.

So, last week, I emailed the Illinois Department of Public Health to get a few simple questions answered about testing totals that seem to have spiked just when the governor has taken heat for testing failings, shortly after Chicago decided to boost testing on their own with Hollywood humanitarian Sean Penn and when compared to other data, doesn’t seem to add up.

State public health officials said that “roughly a month ago” (they wouldn’t give me an exact date) they started collecting testing data in a new online database called RedCap that’s separate from the existing Electronic Laboratory System.

Let’s put that in perspective. Roughly a month ago, on April 23, Pritzker announced his statewide stay-home order would extend through May. The next day, the state’s daily testing totals doubled overnight to 16,316. Pritzker proudly announced he had reached his goal of 10,000 tests per day.

That’s around the time I started to hear sources whisper that the state began requiring labs to report a daily “aggregate” count of total processed tests and that it’s possible some tests might be counted twice when data is gathered that way.

It wouldn’t be unprecedented. Public health officials in some states have been accused of “bungling coronavirus infection statistics or even using a little sleight of hand to deliberately make things look better than they are,” the Associated Press reported.

In Virginia, Texas, and Vermont, for instance, officials said they combined the results of viral and antibody tests to create “impressive-looking testing totals but does not give a true picture of how the virus is spreading,” according to the AP.

I tried to get somebody from the Pritzker administration to pick up the phone to explain the steps they’ve taken to make sure that on any given day an overcount of testing data doesn’t get reported to the public to grab positive headlines. They still haven’t called.

It’s frustrating when a spokesperson paid to answer questions from reporters with a taxpayer-funded salary doesn’t do their job. Since there is a pandemic, I was patient.

Still, it wasn’t until I sent a message asking, “How many emails do I need to send to get a response from IDPH. This is my third one today and still nothing,” before I received my first vaguely written reply.

It took three days, and a couple more emails, before I got a six sentence note that answered none of my follow-up questions.

Instead, the spokesperson had demanded: “Please tell me the focus of your story, who else you are interviewing, and when the story will run.”

That’s the last I heard from them.

So, I can’t tell you with certainty that Illinois didn’t overcount it’s way to besting New York to grab the No. 1 ranking in per capita testing over the last seven days.