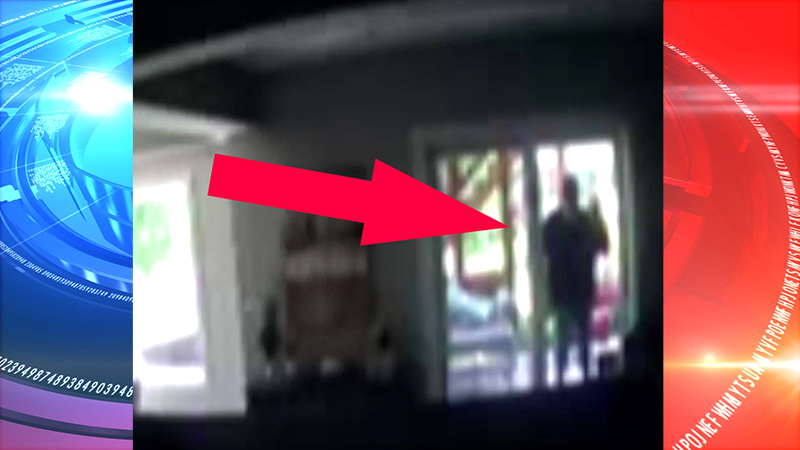 It all happened just before 1 p.m. on Thursday. The Sheriff’s Department got a call from a neighbor in the Manchester neighborhood who saw the whole thing go down.

“We were eating lunch and my son said, ‘Hey look, so and so is outside,’ and I said, ‘No, I don’t think so,'” recounted the neighbor, who did not wish to be identified.

She lives behind the targeted house and called the police.

“So, I saw two guys walking around the backyard. They looked like they picked up a stone or something and dropped it, then hopped over the fence, and it looked like they were hiding between two houses,” the neighbor said.

The homeowner captured a photo from a camera inside her home of the almost intruder.

Before trying the backdoor, the homeowner said one of the men tried to see if anyone was home. When she saw the video, she called her neighbor, Christian Kloster, to check things out.

“I cam outside as if I was checking the mail and I saw the one gentleman sitting at my step. Just said, ‘Hey, can I help you?’ And he gave me a nonspecific answer,” Kloster said.

Kloster told the man, who he believes was the lookout, that the police had been called.

“Then he let out a yell to identify his buddies and shortly there after they took off,” Kloster explained.

Before they could flee Kloster snapped a few photos.

Neighbors said it is a close-knit neighborhood.

“There is a camera somewhere. Someone is home. Everyone is watching, and I feel like our neighborhood is so close. We talk to each other so much, so if we see something that does not look typical, we are on the phone with each other right away. So, not the neighborhood to mess with? No we’re not,” said Kloster’s neighbor.

According to Twitter and the Nextdoor app, people also reported seeing the men in the Andresen Meadow area as well as near 180th and Blondo.

Police are still looking for the men. If you have any information, call the Douglas County Sheriff’s Office.