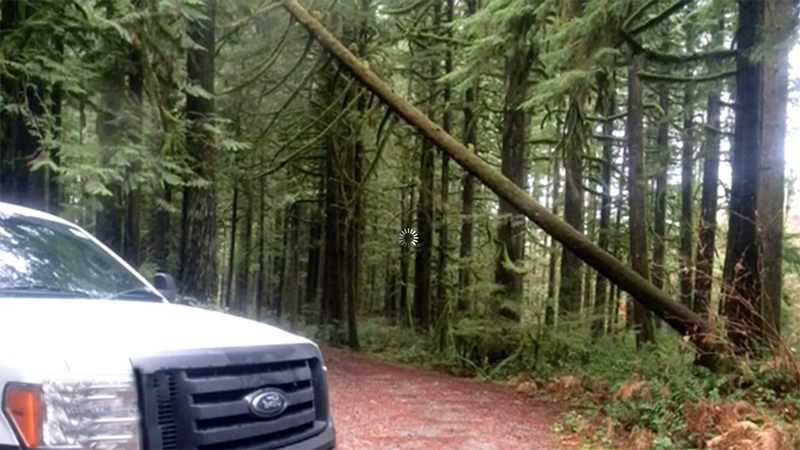 Officials in Snohomish County say someone chopped down a giant tree in a park near Darrington this weekend and botched the job.

They say someone tried to cut down a nearly 100-foot-tall tree, perhaps for firewood. The tree, which was more than 100 years old, ended up blocking a road near a campground in the small park.

“It’s frustrating, you know we have over five million visitors to our parks each year, so not a lot surprises me, and yet today I was surprised to see this image come through on my phone,” said Teigen.

Park rangers were forced to finish chopping it up, as apparently the tree thief wasn’t much of a lumberjack and couldn’t get the tree to fall quite right.

Officials say the tree may have been cut down with a chainsaw in the overnight hours between Sunday and Monday. The park is not gated.

“This was unique, and that’s why the folks decided to put it on Facebook. The rangers were like, ‘Really?’ This is very apparent somebody came in after hours, attempted to take a tree down and did a bad job of it,” said Tiegen.

Tiegen says that taking off with timber from Snohomish County parkland is usually a misunderstanding or an honest mistake. It usually comes from someone near a park property cutting down a tree by accident, or by thinking it was on their land.

In other instances, people simply take wood. But in this instance, Teigen says that was absolutely not the case with what park rangers called unsolicited business in Squire Creek Park.

The wood is going to be re-purposed.

The attempted chopping is a Class C Felony, according to park officials.

Authorities ask anyone with information about the incident about to call the Snohomish County Parks Department.