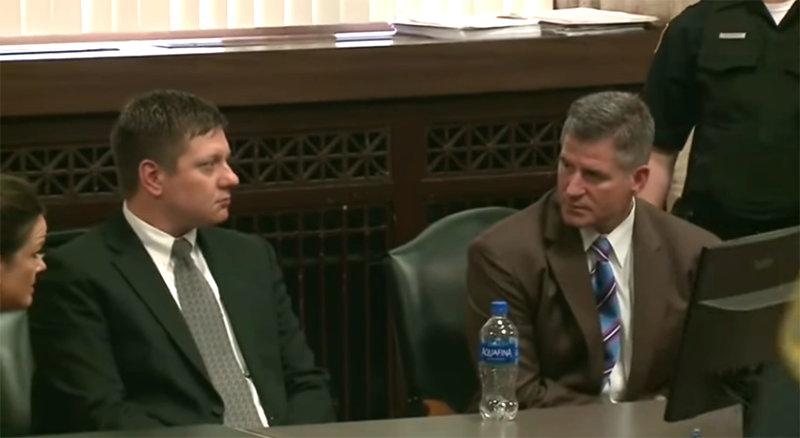 CHICAGO, IL – Chicago police officer Jason Van Dyke was convicted of second-degree murder and 16 counts of aggravated battery with a firearm stemming from the fatal shooting of 17-year-old Laquan McDonald. Van Dyke was found not guilty of official conduct, and his bail also was revoked following the verdict Friday.

Van Dyke sat expressionless in the courtroom as he heard the guilty verdicts being read off, from the second-degree count to the 16 counts of aggravated, one count for each time McDonald was shot. The reaction outside the Leighton Courthouse was peaceful as protesters heard the decision, and many more plan to go to City Hall for what is described as a celebratory demonstration.

McDonald’s family was not in the courtroom to hear the verdict. The family plans to speak about the decision at around 4:30 p.m., said Janette Wilson, a senior adviser for the Rev. Jesse Jackson’s Rainbow PUSH Coalition.

“I think this is historic for Chicago,” Wilson said during a press conference. She added that she hopes this verdict allows for a closer look at excessive police force, training and accountability.

Outside the courthouse after the verdict was read, there was a celebratory mood among most demonstrators.

“I’m just happy we got something,” one activist said.

But not everyone was pleased with the jury’s decision. Kevin Graham, president of the Chicago Fraternal Order of

Police, said he was disappointed by the verdict, adding that certain evidence wasn’t presented and that the trial should have had a change of venue.

“Mark my words: There will be an appeal,” he said during a press conference.

In describing Van Dyke’s reaction to the verdict, Herbert said his client and his client’s family was relieved that a “death sentence” — what could’ve been a life sentence under first-degree murder verdict — wasn’t delivered.

“I just talked to Jason … and I told him, ‘You just went into a heavyweight boxing match with Mike Tyson, and you’re still standing,'” he said.

Herbert also warned of what he called the “Ferguson effect,” referring to the Missouri fatal shooting of black teenager Michael Brown by a white police officer, an event that created unrest in the St. Louis area just more than two months before McDonald’s death. He said the Van Dyke verdict could make officers hesitant to respond to potentially dangerous situations. “Police officers are going to become security guards,” he said.

Herbert said he will appeal the verdict.

Van Dyke was on trial for the October 2014 shooting of McDonald during an incident on the South Side on Oct. 20, 2014. He has pleaded not guilty of first-degree murder and 16 counts of aggravated battery. Van Dyke also faces a count of official misconduct.

But on Thursday, jurors were given instructions for the first time that they could consider second-degree murder charges, an offense carrying a prison sentence of four to 20 years, which is also probational.