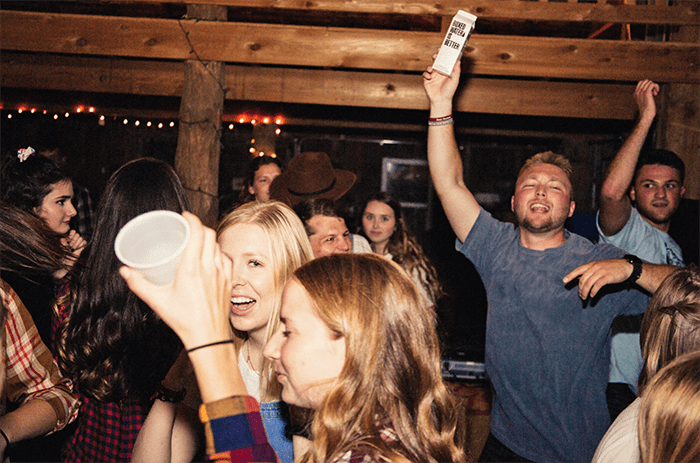 JACKSON, NJ — A homeowner and two others are facing charges after a party at an Airbnb rental drew more than 700 people to a home in Jackson on Sunday, shutting down roads as they became jammed with vehicles, police said.

Yaakov Weiss, 40, of Jackson, who owns the home, and Patience Guanue, 23, and Alicia Hinneh, 22, both of Newark, were issued summonses for violating the governor’s executive order limiting gatherings to 500 people or fewer in the midst of the coronavirus pandemic, Jackson Capt. Steven Laskiewicz said.

The party was advertised on Instagram as a “mansion party,” and included free food and alcohol, News 12 New Jersey reported.

Airbnb has a ban on “party houses” and its policies prohibit gatherings that violate public health mandates. Company officials said Weiss’s listing has been deactivated and Guanue and Hinneh were removed as users in the wake of the incident.

“We strongly condemn the reported behavior, which represents both a clear violation of Airbnb’s community policies and a particularly serious abuse during this public health crisis,” company officials said.

Officers from seven law enforcement agencies responded to break up the party, a task that took more than four hours as partygoers continued to arrive even as police were sending people home, he said.

“C’mon folks, (you’re) putting the health of the police at risk here,” Gov. Phil Murphy said Monday afternoon as he addressed the issue during his coronavirus briefing. “That’s needlessly putting men and women in uniform and their personal health and their families’ health at risk.”

The Jackson house party was just the latest in a string of large parties. Last week, Brick Township police broke up an event in the Baywood section that had more than 400 people in attendance. And authorities have been tracing coronavirus cases stemming from parties in Middletown and Long Beach Island. both involving young people. The Middletown party now has been linked to 65 new cases, and there are 35 lifeguards from two Long Beach Island towns who have tested positive for the virus.

Murphy attributed part of the problem to the fact that indoor dining and indoor bars remain closed.

“The concern is it’s driving some of these otherwise gatherings underground,” he said. “We don’t condone underage drinking or anything illegal, but my comments right now are not related to that. Don’t congregate indoors. I know it’s hot, but the good news is that it’s hot. You can do this outside.”

“You’re playing with fire if you gather indoors without face coverings, without social distancing,” he said.

The state has been under a public health emergency since March, and Murphy’s early executive orders barred public gatherings. In early July, the number of people allowed at an outdoor gathering increased to 500 as the number of new positive cases and those hospitalized have decreased.

Police were called about 8:30 p.m. to a Mill Pond Road home in the Whispering Hill neighborhood, off Leesville Road, and were told by several residents of a large party at a home that was disturbing the neighborhood. Officers contacted Weiss, who told police he had rented out his home on Airbnb for the large party, and that he had left as nearly 200 people arrived.

Laskiewicz said the crowd grew to more than 700 people with more than 100 vehicles parked in the area, and police started receiving 911 calls from other homeowners in the area reporting disturbances and trespassing.

It took all of Jackson’s on-duty police officers, along with help from the Freehold, Howell, and Lakewood police departments, New Jersey State Police, the Ocean County Sheriff’s Office, and the Ocean County Prosecutor’s Office, to clear the crowd, stop new people from joining the party and to direct traffic as people left the area, Laskiewicz said.

As they were clearing the crowd, police received a 911 call from an Overlook Drive resident who said people had broken into their residence and were damaging property. Police determined a family member of the caller had invited a large group from the Mill Pond Road party back to the house. That group was forced to leave the Overlook Drive home, he said.

It took until about 1 a.m. for the officers to clear everyone out without any further incidents, Laskiewicz said.

The investigation is continuing and Jackson Code Enforcement was also notified of the incident so they could follow up, Laskiewicz said.

In addition to deactivating the Jackson listing, Airbnb’s “event-friendly” search filter has been disabled temporarily, and the company has removed the “parties and events allowed” rule from New Jersey listings that authorized parties, for the time being.

“We must take all precautions to limit the spread of this virus,” said Department of Health Commissioner Judith M. Persichilli. “Although they don’t experience what we would call severe illness as often, young people can still transmit COVID-19 to those that they love. We need them to take this public health threat seriously.”