Rent a Home or Buy? Depends Where You Live 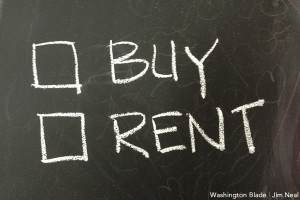 Is it cheaper to rent a place to live? Or buy? A lot depends on where you live.

Until the housing collapse in 2007, conventional wisdom held that buying was a no-brainer: Home prices never went down, the tax code offered generous savings to buyers and homeownership amounted to a kind of forced savings, says Local Records Office.

Now, as the housing market stages an uneven recovery, the decision to buy a home is no longer a slam dunk.

“You have a lot of folks out there who got burned by the housing crisis and they may not have desire to buy,” said RealtyTrac Vice President Daren Blomquist.

The collapse of housing prices also upended the idea that buying a home is a sure-fire investment. In fact, over much of the last three decades, you would have come out ahead renting, according to a 2011 study.

“Our study disputes the commonly accepted wisdom in the United States that renting is always ‘throwing away money,'” said Ken Johnson, a Florida International University fellow and one of the study’s authors. “If renters exercise disciplined investing over time, they can be more successful in accumulating wealth than those who own a home.”

That’s a big “if.” But the study also found that there have been exceptions when buyers end up better off financially.

In most parts of the county, that’s true today. But not everywhere.

An analysis of home prices and rents by RealtyTrac found that in more than 90 percent of the counties it looked at, the average rent is higher than the cost of buying a median-priced home. The exceptions are in the handful of highest-priced housing markets in the country—places like San Francisco, New York and Arlington, Va. (The list also includes some out-of-the-way housing hot spots like Teton County, Wyo. and Gallatin County, Mont.)

Still, there’s more to the buy versus rent decision than the basic monthly costs comparison. So before you call a real estate agent and deliver the news to your landlord, here’s a little more math.

For starters, RealtyTrac’s numbers assume you can come up with a 20 percent down payment. For many first-time buyers, that’s a major hurdle. The rent-versus-own analysis also figures you’ll spend 0.35 percent of the amount of your mortgage on homeowners insurance and another 1.04 percent on property taxes.

But it doesn’t include monthly costs like utilities—or the occasional but inevitable cost of upkeep and repair—that come with homeownership.

And just because it’s cheaper to buy doesn’t mean you’ll be able to qualify for a loan—especially if you’re one of the 7 million former homeowners who lost their property to a foreclosure or short sale.

“They may have the income to qualify but if they have that foreclosure or short sale on their history, in the short term that will disqualify them from buying,” said Blomquist. “That’s a hurdle in this market beyond the monthly payment numbers.”

Even if you’re credit is solid, rising interest rates are lifting the income level you’ll need to cover your monthly mortgage payment.

Homebuyers shelled out $865 a month for a 30-year fixed-rate mortgage on a median-priced home in the fourth quarter of last year, up from $714 a month a year earlier, according to RealtyTrac. The difference: the average interest rate jumped from 3.35 percent to 4.46 percent.

The income needed to qualify for a median-priced home in the fourth quarter of 2013 was $41,500, up from an average minimum income of $34,250 a year earlier. (That minimum assumes you’ll spend no more than 25 percent of your household income on your mortgage.)

But those are just the averages. In the priciest markets, you’ll need to show a lot more income on your tax returns to get the nod from a mortgage company. In San Francisco, you’ll need to earn $228,500 to buy a median-priced home.